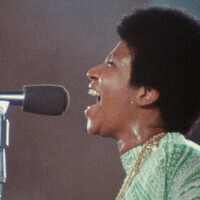 Released in 1972, Aretha Franklin’s double LP Amazing Grace was recorded live over the course of two nights at New Temple Missionary Baptist Church in Los Angeles with the backing of the Southern California Community Choir, directed by gospel great James Cleveland. It became the best-selling album of Franklin’s career and won a Grammy for Best Gospel Soul Album. Delayed for decades, this remarkable film documents these historic sessions at New Temple, offering a glimpse of the making of the album, the making of black gospel music, and the Queen of Soul in her prime.

Presented by American Studies in conjunction with Black Celebration Month. Co-sponsored by the music department and the religion department.