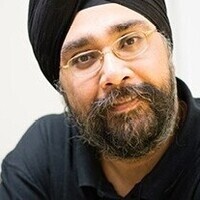 Dr. Harmit Malik,  Fred Hutchinson Cancer Research Center, is interested in evolutionary studies of genetic conflict to gain insight into their mechanisms and consequences. Our genomes are a tenuous conglomerate of different genetic entities, each trying to maximize their own evolutionary success, often at great cost to their genomic neighbors. As expected, this conflict can create problems for the host organism.

Abstract:  Harmit Malik studies the causes and consequences of genetic conflicts that take place between different genomes (e.g., host-virus interactions) or between components of the same genome (e.g., chromosomal competition at centromeric regions). He is interested in understanding these "molecular arms races" and how they drive recurrent genetic innovation, from the perspective of both evolutionary biology and human disease. Antagonistic interactions drive host-virus evolutionary arms-races, which often manifest as recurrent amino acid changes (i.e., positive selection) at their protein-protein interaction interfaces. We investigated whether combinatorial mutagenesis of positions under positive selection in a host antiviral protein could enhance its restrictive properties. We tested ~700 variants of human MxA, generated by combinatorial mutagenesis, for their ability to restrict Thogoto orthomyxovirus (THOV), which is distantly related to the influenza A virus (IAV). We identified MxA super-restrictors with increased binding to THOV NP target protein and 10-fold higher anti-THOV restriction relative to wild-type human MxA, the most potent naturally-occurring anti-THOV restrictor identified. Our findings reveal a means to elicit super-restrictor antiviral proteins by leveraging signatures of positive selection. Although some MxA super-restrictors of THOV were impaired in their restriction of H5N1 influenza A virus (IAV), other super-restrictor variants increased THOV restriction without impairment of IAV restriction. Thus, antiviral proteins like MxA mitigate breadth-versus-specificity tradeoffs that could otherwise constrain their adaptive landscapes.

Student Lunch: Students are also invited to join Harmit Malik at noon on Friday before the afternoon seminar. Spots are limited, so early RSVPs are encouraged. RSVP here to join the student lunch.