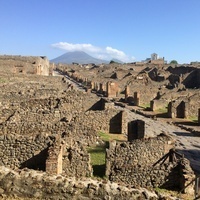 Between Rich and Poor in the Roman City

A new look at the socio-economic texture of a Pompeian sub-elite neighborhood. Presented by Steven Ellis of the University of Cincinnati as part of the Archaelogical Institute of America lecture series.

Roman cities present a patchwork of socio-economic contrast, with enormous civic monuments mixed among more modest spaces from shops to sewers, not to mention every manner of house big and small.  Whether through scale, or the diversity of the parts, even the most poorly preserved Roman cities can overwhelm our best efforts to understand their urban and social textures. This presentation explores various approaches to defining and understanding the social character and development of Roman neighborhoods, drawing on the recent excavations of the Porta Stabia neighborhood at Pompeii. These excavations, under the auspices of the University of Cincinnati and the American Academy in Rome, targeted two town blocks of the city, as well as several adjacent, civic structures (the fortification wall and gate, the streets, and the Quadriporticus); the excavations covered more than ten separate building plots (c. 4000m2) made up of shops, houses, and hospitality establishments.  This ‘behind-the-scenes’ view of the latest excavations at Pompeii opens up an entirely new perspective on the city, with a special focus on the lives and livelihoods of the Pompeian sub-elite.

Co-sponsored by the Reed College classics department and the Archaeological Institute of America. Free and open to the public.