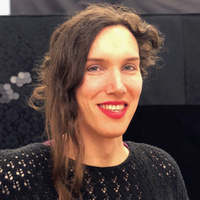 Tuesday Smillie is an interdisciplinary artist whose works address trans-feminist politics, binaries of inclusion and exclusion, and the relationship between individuals and groups. Her large, collaged textiles, featured in The Autopoets, mirror the history of protest banners by feminist and LGBTQ activists, while also acting as citational fields for literary and personal texts. In other works in the exhibition, Smillie explores the imaginative intimacy of reading and gender performance in her ongoing series of watercolors depicting various editions of Ursula K. Le Guin’s 1969 novel The Left Hand of Darkness.

Smillie was born in Boston Massachusetts and moved to Portland Oregon in 2001, where she received her BFA from Oregon College of Art & Craft in 2007. Her work has been shown across the United States and Canada, including recent solo exhibitions at the Rose Art Museum in Waltham, MA,  Participant Inc., New York, NY, Haverford College, Haverford, PA, and group exhibitions at the New Museum, NY, Artist Space, NY, Rubin Museum, New York, NY, and Fort Worth Contemporary Arts, Fort Worth, TX. In 2014 Smillie was named the first resident artist by the Museum of Trans Hirstory & Art (MOTHA). Her work has been featured in Artforum; the Boston Globe; and New York Magazine, and she has lectured at Cornell University, Ithaca and the Whitney Museum of American Art, New York. She currently lives and works in Brooklyn, NY.

Smillie will be an artist in residence at the Robert Rauschenberg Foundation in Captiva, FL in 2020.

Free and open to the public. Presented in conjunction with the exhibition The Autopoets—a collaboration between the Cooley Gallery and Converge 45, on view through October 6, 2019.