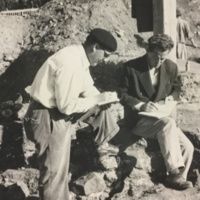 "Archaeology and Politics in the Mid-Twentieth Century: Newly Discovered Results of the 1951-53 Excavations at Sinop, Turkey"

Between 1951 and 1953, a Turkish-German archaeological project led by Ekrem Akurgal and Ludwig Budde conducted a number of excavations in and around the Turkish city of Sinop on the coast of the Black Sea. One goal was to search for evidence of Greek colonization as attested in ancient sources. These excavations uncovered, among other things, a Greek necropolis and a temple, and provided important evidence for early Greek settlement at ancient Sinope. Akurgal and Budde’s finds are even more important considering the relative lack of archaeological exploration of the urban center of Sinop in the following decades. While preliminary reports of their excavations were published in the years following, only few finds – mostly statues and grave markers – were included. A full publication of finds or excavations was never completed.

This talk presents important new information about the Akurgal-Budde excavations in Sinop, based on material from Budde’s personal archive. In 2018, members of the Sinop Kale team, which has been excavating at the city wall since 2015, consulted these archives, finding that they contained numerous photographs of previously unpublished pottery as well as site plans from the 1951-53 excavations, which have never been spatially documented. More scandalously, they also included evidence that Budde was planning to sell some of the artifacts to fund further excavations. This presentation gives an overview of previously unknown and unpublished documents from Sinope, including finds now housed in the Münster museum. Not only do the materials from this archive add to our understanding of the presence of early Greek settlement in early Sinope, they also shed light on the complicated politics of mid-20th-century archaeology.

The Archaeological Institute of America is North America’s oldest and largest archaeological organization. With more than 250,000 members and over 100 societies across the U.S. and the world, it is united by a shared passion for archaeology and its relevance to our present and future.

Free and open to the public. Co-sponsored by the Reed College classics department, the Office of the Dean of the Faculty, and the Archaeological Institute of America.