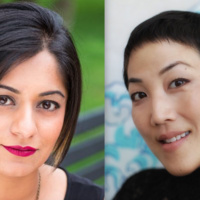 Tanzila "Taz" Ahmed is an activist, storyteller, and politico based in Los Angeles. She currently is a campaign strategist at the Asian American new media organizing group 18MillionRising. Ahmed was honored in 2016 as White House Champion of Change for AAPI Art and Storytelling. She is cohost of The #GoodMuslimBadMuslim Podcast that has been featured in Oprah Magazine, Wired, and Buzzfeed as well as live shows recorded at South by Southwest and the White House.

traci kato-kiriyama is a writer/actor and one half of the award-winning PULLproject Ensemble; director/co-founder of Tuesday Night Project - presenter of the Tuesday Night Cafe series (currently the longest-running Asian American-produced mic series in the country); and Writ Large Press author of a new book still in the birthing process. She has been presented as a performer, poet, theatre deviser, guest lecturer, speaker, facilitator, emcee, and artist-in-residence at innumerable venues from Los Angeles, San Francisco, Washington, and Hawai'i to Philadelphia, Florida, New York, and Toronto.