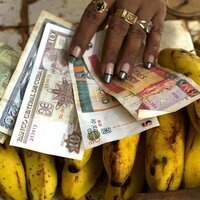 Join us for a lecture by Mrinalini Tankha as part of the fall Anthropology Symposium. Free and open to the public.

"The Heads and Tails of Cuba's Dual Economy"

This talk explores the rise and imminent fall of Cuba’s dual currency system and illustrates how monetary reform becomes a political instrument to protect state sovereignty and socialist state power. It also discusses the diverse strategies and tactics Cubans deploy in their currency practices to overcome defaults in socialist state provisioning and to access new avenues for private accumulation resulting from economic liberalization and foreign flows to the island. Moreover, it shows how Cubans in their social practices of money strategically invoke and rework socialist ideologies of reciprocity, social solidarity and collective struggle to legitimize illicit activities like pilfering and morally cleanse pursuits of private profit, as economic incentives and honorable intentions do not line up neatly in a shortage economy.

Mrinalini Tankha is an economic and applied anthropologist at Portland State University. In her research, Dr. Tankha examines macroeconomic monetary policy and everyday sociocultural practices of money in Cuba to understand the broader confrontations of its official socialist ideology with shifting consumption patterns, hybrid business practices, rising labor hierarchies and widespread illicit activities. Her work also situates Cuba’s current postsocialist transition within past histories of decolonization, economic instability and struggles over sovereignty in Latin America and the Caribbean. Based on archival and ethnographic research conducted over a period of ten years, I am currently completing a book manuscript titled The New Cuban Counterpoint: Money, Value and Sovereignty in Post-Soviet Havana.

Students, Open to the Public