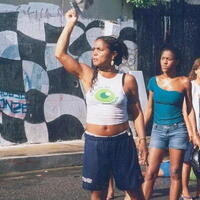 Join us for a lecture by Keisha-Khan Perry as part of the spring Anthropology Symposium.
Free and open to the public.

"Black Women and the Fight for Land Rights in the Americas"

This talk will explore three ongoing struggles for black land rights in Brazil, Jamaica and the United States. These social movements are often led by black women and they always understand the right to land as interconnected with human rights demands for housing, clean water, and safe communities. Perry looks at their expansive definitions of state violence that look critically at police abuse and racial capitalism and the radical models of social democracy, spatial inclusion and citizenship belonging that they propose for more just and feminist societies.

Feminist anthropologist and political activist, Perry focuses on urban social movements against the violence of forced displacement and is the author of the prize-winning book, Black Women against the Land Grab: The Fight for Racial Justice in Brazil, an ethnographic study of black women’s activism for housing and land rights in Salvador, Brazil. She writes on issues of black land ownership and loss and the related gendered racial logics of black dispossession in the African diaspora, in the US, Jamica, and Brazil. She recently served on the Latin American Studies Association delegation to investigate the impeachment of Brazilian President Dilma Rousseff.