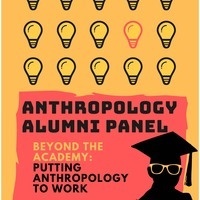 Anthropology Alumni Panel: Beyond the Academy

Emily Youatt '10
Emily graduated from Reed in 2010, where she wrote her undergraduate thesis on the cultural and linguistic revitalization of the White River First Nation in the Alaska/Yukon borderlands, based on ethnographic research she did during her junior and senior years. She went on to get her M.A. from the University of Chicago ('12) and then worked in Central Asia (Kyrgyzstan, Tajikistan), where she managed programs in maternal and child health, nutrition, disaster risk reduction, microfinance, and refugee integration with international development organization Mercy Corps. In 2018 Emily relocated back to the U.S. after four-and-a-half years abroad and now works with the World Justice Project as their Senior Development Associate in Seattle.

Ethan Wilensky-Lanford '03
Ethan is an evaluator, working to help make nonprofit organizations more impactful and effective. He is also a doctoral candidate in anthropology at Rice University, where he is focused on religion and security in Kyrgyzstan. Previously, he worked as a journalist for The New York Times and other media outlets, reporting from Central Asia, Moscow, and the United States.

Amina Rahman '14
Amina is a community and labor organizer from Portland. After Reed, she worked as a paralegal at Immigrant Law Group doing immigration case work and organizing workshops for immigrants in the local area. She began doing solidarity organizing with the Burgerville Workers Union in 2015 and most recently worked as a staff organizer at Service Employees International Union Local 49, organizing janitors cleaning downtown buildings and Nike offices for living wages and against racist working conditions.

Peter Stockman '77
After graduating Reed, Peter worked as an architectural photographer, historic preservationist and graduate assistant teaching introductory operations research.  Realizing he loved applied mathematics more than applied mathematics loved him, he sold out and joined AT&T (when it was “the Bell System”) forecasting the demand for, and costs of, new products coming out of Bell Labs.  While getting an MBA from University of Chicago, Peter provided technical advice to nervous PhD students at the Center for Research in Security Prices.  Peter worked his way through the ranks of strategy consulting to become a partner at Accenture in its Global Capital Markets and Global Energy practices.

Francisca Garfia '17
Francisca started working for the City of Portland in the Office of Management and Finance (OMF) during the spring of 2017. She was first the division's archivist as we prepared to relocate out of the Portland Building, and transitioned into my current role as a member of the Chief Administrative Officer's (CAO) communications team in October 2017. Since then, Francisca has worked in the CAO's office and my duties include staffing committees, designing presentations and graphics, writing research reports, and drafting memos for our bureau leaders.

Jordan Davis '15
Jordan went to work for two years with the White Bird Clinic in Eugene, Oregon where they trained as a crisis counselor on a mobile service van dispatched through the city's police non-emergency line. They are now in nursing school in Atlanta, GA looking at being a nurse practitioner focusing on queer & trans health, mental health, and mobile healthcare delivery. They were first specializing in midwifery but then realized they don't like babies very much...!

Claire Dennerlein Manson '02
Claire works for Pink Martini and Heinz Records in sales and special projects. She describes her work as, "one part marketer, one part merchandizing and shipping department, one part party planner and general Gal Friday. I'm lucky enough to work with amazing people and a unique band making fabulous music!"

The closest Parking lot to Prexy is in the west lot. Park next to the Scholz dorm (#14 on the map) and walk up the staircase to the back of the building.