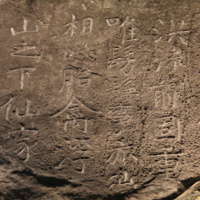 Eulogy for Burying a Crane is a sixth century inscription once carved on a cliff of Jiaoshan Island in the Yangzi River. Its ruins were discovered in the early eleventh century, and the inscription would eventually be enshrined as one of the major masterpieces of Chinese calligraphy. This talk traces the origin and reception of the monumental work and, through the case study, reexamines calligraphy as a contested field of various cultural and political forces in traditional China.

Lei Xue is associate professor of art and art history at Oregon State University. Sponsored by the art department's Cooley Gray Fund. Free and open to the public.